Much has been said and written regarding the hijabi in a burkini in theSports Illustrated Swimsuit Edition.

There are plenty of opinions, mine however, is the overarching feeling of betrayal.

Growing up as a first-generation Canadian to a fundamentalist Muslim family, I spent a lot of time being caught in between two worlds.

This dichotomy was most pronounced when it came to feminism.

I grew up in a world where feminism was all around me like a beacon of hope cutting through the opposing ideas I was being taught at home. 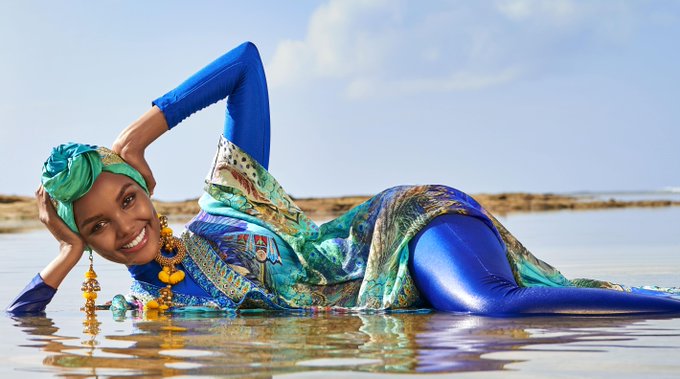 Halima Aden makes history as the first model to wear a hijab and burkini for Sports Illustrated Swimsuit: http://go.si.com/OLZPdGp .

At home I was taught that, and nine years old, I needed to wear a hijab to protect myself from men who wanted to molest me.

From my society, I learned that’s called victim-blaming.

At home I was taught that good, pure, clean girls wore hijab and filthy, loose, despicable girls did not.

From my society, I learned that was called slut-shaming.

Given the choice between those two worlds, I eventually chose to break free.

That decision almost cost me my life and my daughter’s life.

I’m grateful that unlike Aqsa Parvez, a teenager from Mississauga, my family were not able to follow through on the threat to kill me for removing my hijab.

I was able to escape with my daughter.

But where have I escaped to? I have escaped to the upside down.

The society that that I fled to seems to have been a mirage.

Instead, I find myself in a world where the very things I escaped from are being fetishized by western corporations like Gap, Mattel, Nike and now, most recently, on Sports Illustrated.

Why are we suddenly celebrating religious modesty culture? Isn’t that the very thing feminists have been fighting against for centuries? How is it now suddenly something positive?

There is a general lunacy in the free western world celebrating religiously prescribed clothing, but a specific lunacy in the Swimsuit Edition of Sports Illustrated doing it.

Imagine if that were an Amish woman in her prairie dress and bonnet … it’s beyond parody.

But you never see Mormon underwear on the Victoria’s Secret runway. You never see any other religious clothing being fetishized like the hijab and to such a nonsensical degree.

L’Oreal had a hijabi model for their shampoo ads. Shampoo. You can’t see the model’s hair.

In their frantic zeal to celebrate the hijab they do the most ridiculous and confusing things.

I think that confusion stems from a misunderstanding.

They do not understand that the hijab is not benign cultural clothing like lederhosen or a kilt (women from hundreds of different cultures that have no relation to each other wear it) — it is religious.

It is prescribed by fundamentalist Muslims. In some countries girls cannot go to school unless they wear hijab.

Across the world, if women try to remove it, they can be abused, imprisoned or even killed. There is nothing benign about it.

Despite the fact that it is a tool of misogyny seeped in oppression that perpetuates rape culture, every woman should be free to wear it.

A woman can choose to partake in her own subjugation; that is her right.

There is a chasm of difference between supporting a person’s right to do something and celebrating the thing they are doing.

People have the right to tattoo swastikas on their necks, but that is not something that we would celebrate. We would not splash those faces on magazines.

It’s an extreme example, but it drives the point home.

Individuals have the right to wear hijab if they please, but we certainly should not be splashing it on magazines and on Barbie’s head as if it were a positive thing worthy of being celebrated.

— Yasmine Mohammed is a Canadian human rights activist, advocates for the rights of women living within Islamic majority countries, as well as those who struggle under religious fundamentalism. She is also the founder of Free Hearts Free Minds, an organization that provides psychological support for ex-Muslims living within Muslim majority countries- where the state sanctioned punishment for leaving Islam is death.