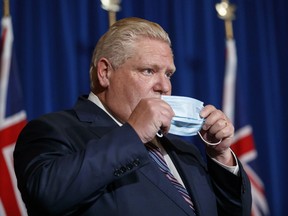 Ontario Premier Doug Ford, shown here putting his mask back on after a December press

Just when we thought the pandemic was behind us, COVID hysteria is back with a vengeance in Canada, with Ontario standing out once again as uniquely fearful, where the science apparently works differently than everywhere else on the planet. With most Western countries now ditching the last of their COVID-19 restrictions, there is chatter that Ontario ought to reimpose restrictions that were recently lifted, in particular the mask mandate.

The chatter is not merely from those who never saw a government rule or restriction they didn’t like, but from the self-appointed experts who hold forth in the media and social media on the need to tighten restrictions yet again in the face of a sub-variant, in an apparently never ending battle with the virus.

We can see how bizarre the Ontario debate is when we look at other comparable advanced countries, which in the face of rising cases are sticking to their resolve to live with the virus, treat it similarly to a seasonal flu, and return to life as normal. Countries spanning the spectrum from South Korea to the UK to the German-speaking countries in Europe have all decided, and are sticking to, the decision to lift restrictions and stand on an irrevocable path to normalcy.

Switzerland recently lifted all remaining restrictions, including mandatory mask use on public transport and in hospitals, arguing that such rules had outlived their usefulness given relatively high vaccination rates. What’s ironic is Ontario’s vaccination rate of 82 per cent of the population fully vaccinated, and nearly 50 per cent with a booster dose, is well above most of these other places. There is thus even less rational cause for fear in Ontario, yet the hysteria meter, like the wastewater signal which everyone seems to be obsessed with, is off the scale.

What’s more, contrary to what is widely believed, the science on mask use is far from settled. A recent and widely shared study purporting to show that masks work has been thoroughly dissected by American epidemiologist and health policy expert, Vinay Prasad, who carefully identifies serious, multiple methodological defects in the study, and low statistical power in the apparent finding in favour of mask use. None of this should surprise us. Remember that Dr. Anthony Fauci expressed skepticism about mask use early on in the pandemic, as for that matter did Dr. Theresa Tam, Canada’s chief medical officer of health, around the same time. Recall that in Ontario, during the first wave, cases began trending down in the spring of 2020, long before the mask mandate was imposed in July. It would seem that hysteria is abetted by amnesia about the facts.

The Ontario mask vigilantes like to point to Quebec, where the mask mandate has not yet been lifted, and in fact has been extended to the end of this month. They might be disappointed to learn that reports suggest that new cases are as high or higher in Quebec as they are in Ontario. Quebec has more people hospitalized than Ontario, 1479 as against 1091 at the time of writing. Given that Ontario’s population is almost as twice as large as Quebec’s, it doesn’t take a great deal of quantitative insight to realize that Quebec’s continuing reliance on a mask mandate hasn’t impacted infection rates, the first link in the chain of causation that leads to someone being hospitalized with COVID.

But facts won’t deter the fearmongers. Expect to see the usual chorus of doomsayers tell us that the Ontario hospital system is about to collapse under the weight of new hospital admissions. We heard exactly the same chorus during the winter Omicron wave, that led Premier Doug Ford to reimpose a partial lockdown, again almost unique among comparable jurisdictions around the world. As I pointed out then, the Ontario hospital system, including ICUs, as a whole generally held up well, although a few hospitals did indeed struggle, but not for too long. Unfortunately, but predictably, the “sky is falling crowd” pinpointed those few hospitals that were struggling, conveniently ignoring the fact that the system as a whole stood up more than satisfactorily in dealing with the Omicron wave.

As of April 4, according to data from Critical Care Services Ontario in its daily updates to hospital stakeholders, the critical care bed occupancy rate for COVID-19 stands at 73 per cent, lower than it did at the height of the Omicron wave of 77 per cent. This is well below the 85 per cent capacity which is treated as a red line by hospital administrators in Ontario.

Despite this good news, you can bet that Premier Ford will be under intense pressure to reverse course on the reopening of the province. Recall that he appears to have succumbed to such pressure at the time that he reimposed a partial lockdown this past winter, warning, without citing any credible research, the fear that “hundreds of thousands” of new cases of COVID-19 would overwhelm the province. At that time, he took what he described as “decisive” action to stem the tide. There’s no evidence that the winter lockdown made much difference, except to deal a further blow to the physical, mental, and economic health of Ontarians, including small businesses that were barely keeping their heads above water after surviving previous lockdowns.

The most decisive thing that Ford can do now is to stand firm against the COVID zero zealots, and lead Ontario back to normalcy, like in every other sensible place on planet Earth.